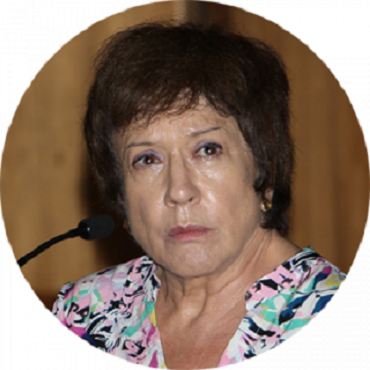 She entered the Chemistry undergraduate program of the Chemical Institute of the University of São Paulo, IQ/USP, in 1967. She was, however, only an average student during the course. Times were troubled, the course structure was very rigid and there were financial difficulties. These factors led her to teach Chemistry at the high school level during the night period (1969/1971) instead of researching in the Institute's laboratories. Once she earned her Bachelor's degree, she still believed her calling was to do scientific research, so she chose graduate school. She knew very little about the work being developed at the Institute but was lucky to be a personal friend of Prof. Francisco G. Nóbrega, who advised her to look for Prof. Giuseppe Cilento.

She began graduate school in 1972, just a little after the publication of McCord and Fridovich (1969) describing the function of the "superóxido dismutase" enzyme. This way, from the beginning, she tried to understand the role of the free and oxidant radicals in Biology. Her doctoral thesis, which was defended in December of 1975, dealt with the "Effects of "difenóis" on some oxidizing processes". Since then, Professor Ohara Augusto has developed her scientific career, with an internship as a post-doctor in laboratories of excellency in Brazil (Dr. Giuseppe Cilento, 1972/1977) and in the United States (Dr. Lester Packer, 1979/1980; Dr. P. R. Ortiz de Montellano, 1980/1982). She was hired as an assistant Professor doctor in the Biochemistry Department of the IQ/USP in 1977. Returning from her post-doctorate (1980/1982) to Brazil, she set up a laboratory of electronic paramagnetic resonance (EPR) at the IQ/USP, jointly with Professor Shirley Schreier. Since 1987, this laboratory has been maintained, renovated, and used by researchers from Brazil and South America.